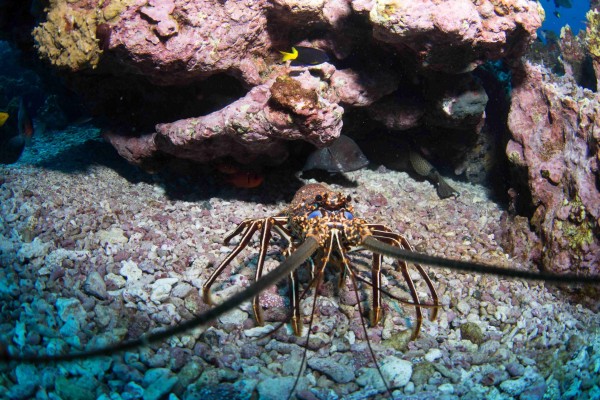 Nature notes is a monthly instalment bringing you information and updates about the natural world on Ascension Island. In this month’s notes – brown spiny lobster!

In the rocky crevices surrounding Ascension Island’s coastline, no more than 30m deep, there lives the brown spiny lobster (Panulirus echinatus). These crustaceans resemble elongated crabs and, like other crustaceans, have a hard shell called a carapace. Unlike true lobsters, they lack large claws and are instead distinguished by their remarkably long and spiny antennae. They are therefore known by other names than lobster such as langustas or crayfish, as is used on Ascension. The brown spiny lobster is also found along the Brazilian coast and other Atlantic islands such as St Helena, Tristan da Cunha, Cabo Verde and the Canary Islands. Females grow up to 15cm long, with males growing to 19cm.

The diet of the spiny lobster includes green algae, small crustaceans, molluscs and fish carcasses. To digest the hard-shelled crustaceans and molluscs, spiny lobsters have a strong set of jaws located both in their mouth and, interestingly, also in their stomach. Yes, the lobsters have what is known as a gastric mill, which continues to grind up prey even after it has been swallowed. This gastric mill also allows them to access another important part of their diet: calcareous algae. These hard plant-like organisms provide the spiny lobsters with the important mineral calcium.

Lobsters use calcium to build strong shells, which protect them from predators. Unfortunately, as the lobsters grow, this shell can get a tad cramped. To fix this they shed their old, restrictive shell and produce a roomier one equipped with plenty of space for them to grow into. Once a lobster has shed multiple times, and has grown to a fair size, it can focus on reproducing.

After mating, females lay and carry their eggs for several months on special strands found underneath their tails. Following further development, these eggs are released and left to float in the sea where they will hatch. At this early stage, they are known as phyllosoma and look like long-legged, see-through spiders. They drift freely in the currents, feeding on microscopic animals also floating in the sea. Some of these young lobsters have even been found over one thousand kilometres away from Ascension, out in the open ocean. After approximately one year, the young that have been lucky enough to survive predation and the unpredictable currents, will sink to the seafloor and settle as the next generation of brown spiny lobsters gracing Ascension’s waters.