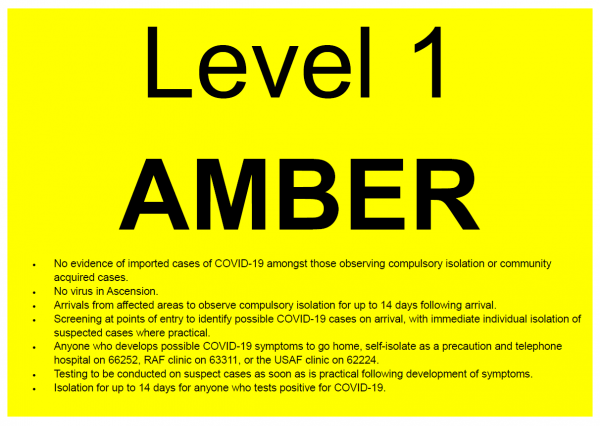 On Monday 07 February, an individual observing compulsory isolation measures returned a positive COIVD-19 test result during routine testing of persons under quarantine. In line with AIGs COVID-19 policies and procedures, the individual was had their health monitored by medical staff and was subject to additional testing every 48 hours to confirm the level of their infection.

Further testing conducted on the individual this week has returned multiple negative results and as such they are no longer deemed to be infectious or a risk to others. They have therefore had their period of compulsory isolation ended and the Ascension COVID-19 Response Level has been reduced to Level 1 AMBER.

The individual in question arrived at Ascension on Saturday 05 February on a flight from Turkey. They had previously returned a negative COVID-19 test result prior to their departure for the island. As with all persons under quarantine, they were subject to testing as part of compulsory isolation protocols.

As they were observing compulsory isolation in a bubble, they were immediately separated and placed into individual isolation.

The result of subsequent tests on Monday 14 February and today, Wednesday 16 February, returned negative results. Given these negative results the Senior Medical Officer is satisfied that there is no risk to the public from the previously positive individual.

The other individuals that were previously quarantining in the same bubble as the positive case will remain in compulsory isolation until they have completed a usual course of quarantine. They have been subject to ongoing testing whilst under isolation and no others have so far returned a positive test result. They will be subject to further observation and testing before being granted permission to exit compulsory isolation.

Even though the individual that tested positive had not had any contact with the wider public, and therefore COVID-19 was contained, the level of risk to Ascension from COVID-19 had increased and as a result the response level was raised. Following the negative test result and confirmation that the threat from COVID-19 had reduced, the response level was returned to Level 1 AMBER.

Is it safe for this individual to be released?

The protocols in place in Ascension have been designed in liaison with experts in the UK Health and Security Agency (UKHSA) to ensure that any person arriving at the island is kept separate from the general public until the Senior Medical Officer can be assured that they do not pose a risk of introducing COVID-19 into the community.

The test results have been analysed by the Senior Medical Officer. They are satisfied that the lack of virus mean that the person in question is non-infectious. As a result, they do not pose a risk to the public.

What about the other people in their quarantine bubble?

They will continue to be monitored by medical staff and will be subject to further testing before being released from quarantine at the end of their compulsory isolation period.

All those who arrived on the same plane, and who were observing isolation in the same quarantine bubble, were subject to compulsory isolation and testing protocols. Authorities are assured that these protocols remain robust, and as such the other passengers are permitted to exit quarantine following the completion of their isolation period and the return of negative COVID-19 test results.