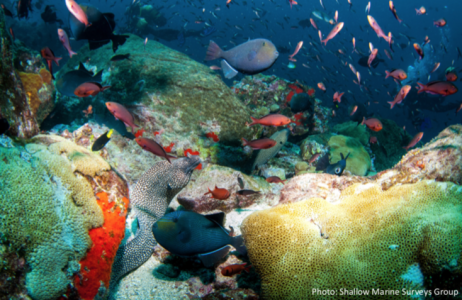 The shallow sub-littoral zone comprises the fringe of sunlit, nutrient rich coastal water between the low tide mark and a depth of approximately 50m. On Ascension Island, these habitats are characterised by continuously warm waters (22–29 oC), abundant fish life and a scarcity of erect, benthic seaweeds, largely due to grazing by the ubiquitous black triggerfish. Species diversity is highest on the volcanic reefs and boulder fields that dominate the sub-littoral fringe. These are often covered with growths of coralline algae and encrusting sponges and corals and provide habitat for locally-harvested food species such as rock hind, spotted moray and spiny lobster. Sandy substrates are also common but are generally shifting and unstable, and support a depauperate, albeit distinctive, animal and plant community.