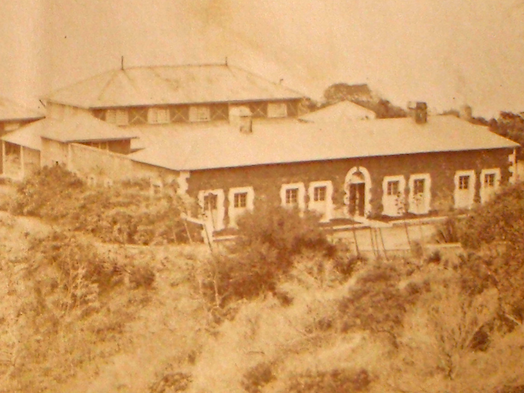 Although a garrison hospital already existed in Georgetown the need for alternative hospital services had been noted throughout the early occupation of the island. This was again highlighted with the arrival of HMS Rosamond in 1847 carrying a crew infected with yellow fever.

Two infected sailors and two boys were evacuated to the mountain cottage and placed in quarantine. Although one man died men the other man and two boys recovered from the entire effects of change of climate and doting attention of the physicians. As such it was decided another hospital should be constructed on Green Mountain, which was duly completed on 29th September 1849, and affectionately known as "the San" (as in Sanatorium).

The site was chosen due to its elevation of 1965 feet above the sea level and 500 feet below the cottages and garden on the mountain, which placed it six miles from the garrison in Georgetown. The hospital was built with prefabricated timber frames, brought in from England, in-filled with bricks.

The moist climate on the mountain was not kind to the timber structure leading to almost an entire rebuild of the hospital in 1867 with stone. In 1873 and 1874 the hospital was used to convalesce troops wounded or affected by disease, while fighting in the third Ashanti War in what is now Ghana in West Africa.

The hospital today serves as the Residency, home of the Administrator. As it is a private residence it is not open to the public without prior invitation.