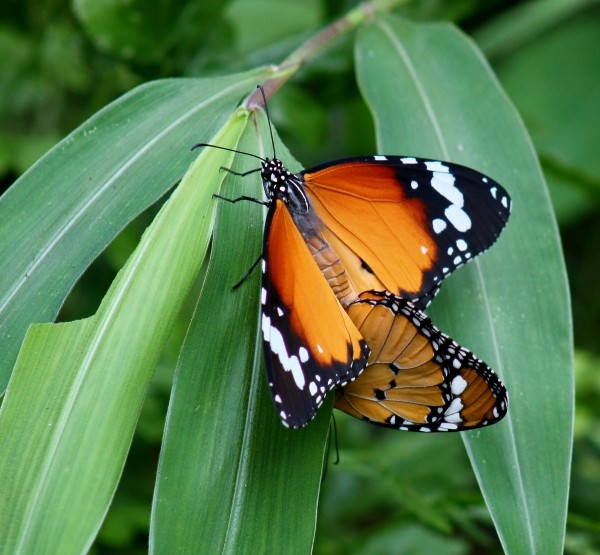 Nature notes is a monthly instalment bringing you information and updates about the natural world on Ascension Island. In this month’s notes – African Monarch Butterfly!

This large orange butterfly can be seen across Green Mountain during our winter. It has vivid orange upper wings and white spots on the dark brown wingtips. You may see the wingtips shimmer with purple iridescence in the sun. Many individuals look somewhat battered by their long journey to the island, with faded or pale-streaked wings.

African Monarchs are found across Africa, Asia and Australia. Their migrations are much more localised than the famous migrations of the New World Monarch, which migrates between Mexico and Canada over the course of several generations. Nonetheless, they are still mobile enough to travel the thousand miles from central Africa to Ascension, probably as a result of being caught in the trade winds. Likewise, African Monarchs are found on many other isolated islands across the world. However, they cannot breed on many such islands, including Ascension and until recently, St Helena. This is because the caterpillars need to feed on milkweed plants, which are absent from Ascension and which have only recently been introduced to St Helena.

Monarch caterpillars build up a toxin from milkweeds to deter predators. As a number of other toxic butterflies share their bright orange colouring, predators quickly learn to avoid orange butterflies. This is called Mullerian mimicry. However, some non-toxic butterflies, such as the female diadem on Ascension, have also evolved to look like the monarch. Called Batesian mimicry, this strategy makes predators avoid the diadem without the diadem having to accumulate toxins. Yet if the diadem population becomes too much larger than the monarch, predators will no longer learn to avoid orange butterflies and the diadem will decline.