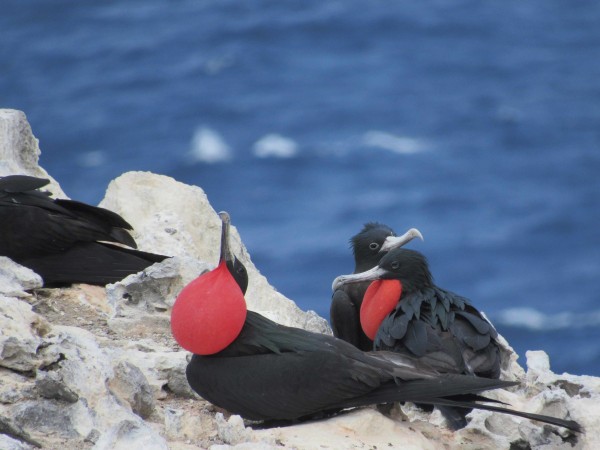 Nature notes is a monthly instalment bringing you information and updates about the natural world on Ascension Island. In this month’s notes – Ascension Frigatebird!

The Ascension frigatebird is unique to Ascension Island, nesting on Boatswain Bird Island and the Letterbox Nature Reserve. They remain local year round however individuals have been recorded as far as South America and Islay, Scotland.

The Ascension frigatebird is a dark seabird with long slender pointed wings, deep forked tail and hooked bill. With a wingspan of 196-201cm (77-79 inches), it is the largest seabird nesting on the island. During the breeding season, the male enlarges his impressive red gular pouch to attract the attention of passing females. Females are slightly larger, brownish black with a pale blue eye ring. Juveniles can be distinguished by their white head and underparts.

Boatswain Bird Island is the main stronghold for nesting frigatebirds. Feral cats introduced in the 1800s wiped out the mainland colonies but an eradication programme in 2002-2004 successfully removed the feral cats and in 2012 two pairs of frigatebirds returned to the mainland to nest. Since then, the mainland population has increased annually with a whopping 1,493 nesting attempts in the 2020-2021 breeding season on the Letterbox peninsula.

Ascension frigatebirds are believed to nest every second year. They lay a single white egg on the bare ground and incubate for around 44 days. It takes 6-7 months for the chick to fledge from the nest and they may receive additional post-fledging care for 3-4 months.

The Ascension frigatebird feeds primarily on fish, mainly flying fish, by surface dipping. They do not have waterproof feathers and can drown if they become waterlogged. Frigatebirds also predate on newly hatched green turtles and sooty tern chicks. They often harass smaller birds to steal their prey in a process called kleptoparasitism.