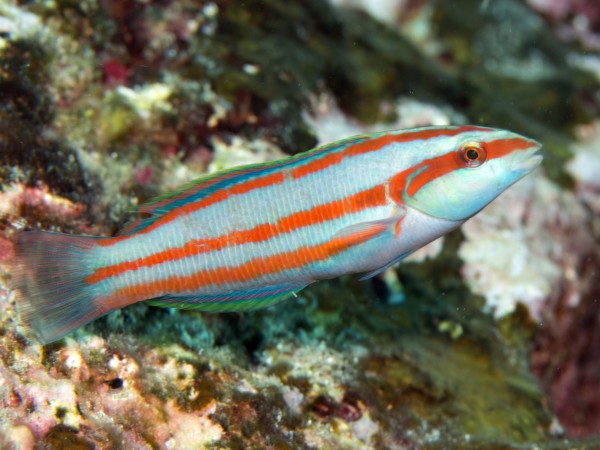 Nature notes is a monthly instalment bringing you information and updates about the natural world on Ascension Island. In this month’s notes – Ascension Wrasse!

Ascension Island has several endemic fish species; that is fish species that can be found nowhere else on earth. One common species is the Ascension Wrasse (Thalassoma ascensionis). Whether rock pooling, snorkelling or SCUBA diving around the Island you are bound to see this relatively small but superbly colourful fish flitting around.

Related to the St Helena Wrasse, this cigar-shaped fish grows up to 10cm long but is commonly seen at smaller sizes in rock pools and on reefs. Their body is a light blue, with thick orange stripes running horizontally from the tip of the mouth to the base of the tail. They can be seen as lone individuals or shoaling in small groups.

These groups are generally mixed-sex. However, all is not as simple as it may first seem, because the Wrasse exhibit something called protogynous sequential hermaphroditism. What this mouthful means is that the Wrasse start their lives as females, mating with males to produce eggs which they leave to hatch and fend for themselves. Then, when a male dies, the largest female in the group will change into a male that will eventually breed with the remaining females. By only becoming male when the fish are older and larger they can defend their territories and females more successfully.

Another interesting detail about the Ascension Wrasse relates to its feeding habits. Around Ascension there exist several marine animals known as cleaner species, which provide a cleaning service to other marine organisms. The Ascension Wrasse is one of these cleaner species. A potential client, such as a moray eel, will place itself in front of a Wrasse, signalling its desires with its body position or colouration. The Wrasse then gets to work picking off parasites, damaged tissue, and mucus. This behaviour works out mutually beneficial for the client and the cleaner, with the client getting their scales scoured and the Wrasse getting a mucusy meal.

The Wrasse do not completely rely on cleaning for their food though. They are known as facultative cleaners meaning they only take up this role part-time. When not picking off parasites from another fish the Wrasse have a carnivorous diet, feeding on small crustaceans and invertebrates. What’s more, cleaning is mainly observed in juvenile Wrasse – If only human teenagers cleaned for their dinner too. 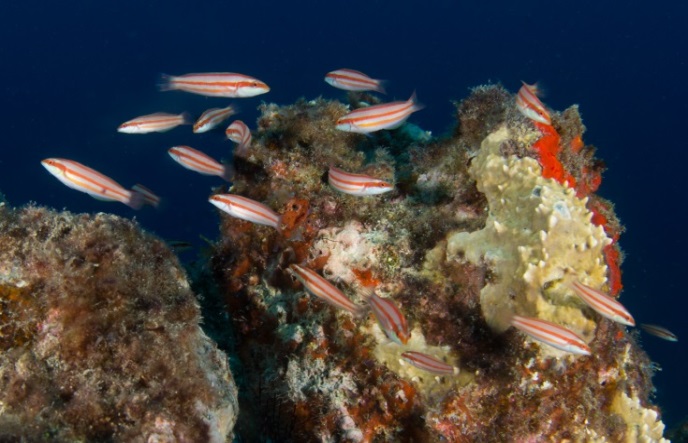