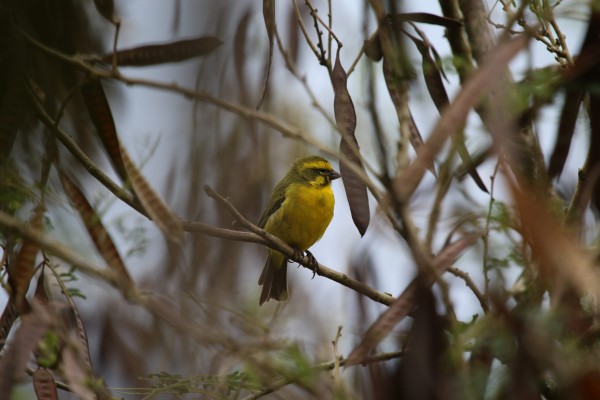 The Atlantic canary is a small songbird belonging to the finch family. It is native to the Canary Islands, Azores and Madeira. Humans have introduced this species to the Hawaiian Islands on the Midway Atoll as well as Puerto Rico and Bermuda. Canaries can be found across Ascension Island, particularly around Georgetown.

The Atlantic canary is yellow-green with brown streaks across the back. The male has a largely yellow-green head and underparts with a bright yellow forehead, face and eye stripe. The upperparts are grey-green with dark streaks across the back. The female is similar but duller with a grey head and breast. Juvenile birds are largely brown with dark streaks.

The canary is a sociable bird which often nests in groups. Each pair defends a small territory around its nest. They build a small cup-shaped nest in a tree or bush above the ground. The nests are made of twigs, moss and other plant material, often lined with soft material including hair, animal fur and feathers. A clutch contains 3-4 eggs and 2-3 broods are raised each year. Eggs are incubated for 13-14 days and the chick will fledge after 14-21 days.

Canaries are active during the day. They spend much of their time feeding in flocks, foraging on the ground or amongst low vegetation. They feed on seeds, plant material and small insects. They can be found occupying a range of habitats from pine forests to sand dunes.

The Atlantic canary is the original descent of the common domestic canary. Through domestication, breeders have introduced a range of colour varieties including red, yellow, black, brown and more. The colour ‘canary yellow’ is named after the domestic yellow canary, produced by a mutation which suppressed the melanin’s of the dull green wild Atlantic canary colour. Canaries are relatively common pets, particularly because they are easy to care for and have a beautiful song.

Canaries were first recorded as domesticated birds when they were traded by Portuguese and Spanish explorers in the second half of the 15th century. By the middle of the 18th century canary breeders were developing distinct varieties through selective breeding.

Canaries have a special relationship with humans. For many years they were carried by coal miners; if the canaries showed signs of distress or illness, the miners knew to evacuate; thus originates the phrase “canary in a coal mine”.