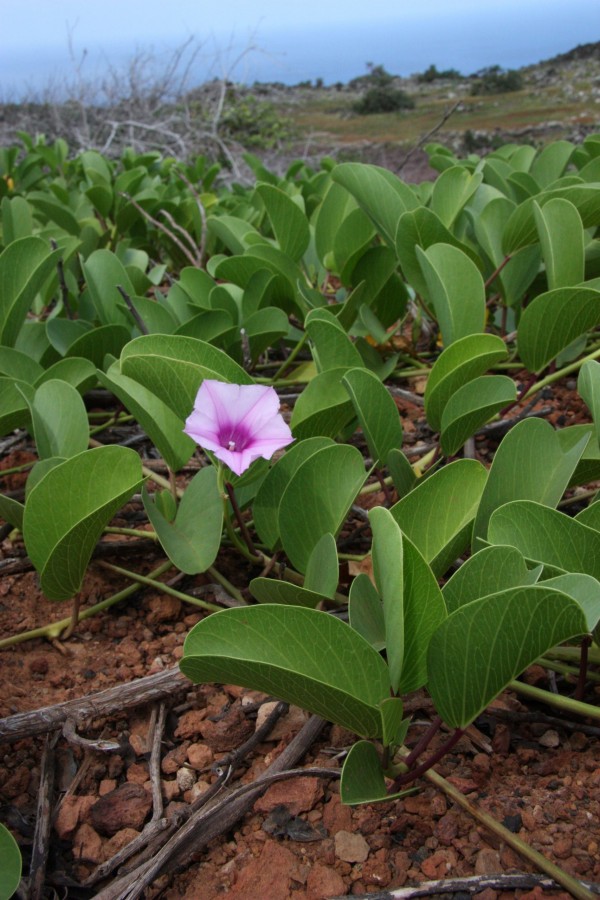 Ipomoea pes-caprae is native to Ascension and can be found in most parts of the island, especially along the NASA road. It is well adapted to high temperature conditions, but also thrives in areas that receive heavy rain fall.

This climbing evergreen shrub grows rapidly, forming a dense mat of growth. Its large thick tap root can grow to three metres long and has long succulent stems that contain a milky latex sap. The sap protects the plant from most insects and large grazing mammals such as donkeys. The flowers however, have no chemical defence and are routinely eaten by caterpillars, beetles, and grasshoppers.

The leaves are thick and robust, ovate or heart-shaped, and have two distinctive lobes that resemble a goat's hoof or a camel’s foot, hence its nickname.The flowers are funnel-shaped, pinkish-lilac in colour with a darker centre and are usually short lived. The stamens and style are surrounded entirely by the petals. The fruit is a spherical capsule, 12–17 mm in diameter, and produces a single dark brown seed. These seeds float and aren’t damaged by salt water, which is how Ipomoea has naturally spread all across the tropics.

Our Ipomoea is one of 500–600 closely-related species of vines and shrubs, all widely distributed throughout the tropics and subtropics, which comprise the complex genus Ipomoea. The name Ipomoea means 'worm like' and is derived from two Greek words, ips meaning ‘worm’ and homois meaning ‘like’. This refers to the coiled, worm-like flower bud of members of this genus. The species name pes-caprae is Latin for ‘goat’s foot’, describing the shape of the leaves like the common name “Camel’s Foot Creeper”. Ipomoea is commonly used in traditional medicine and is often harvested from the wild. It is also often cultivated, especially near the coast, where it makes an excellent ornamental ground cover and soil stabiliser.