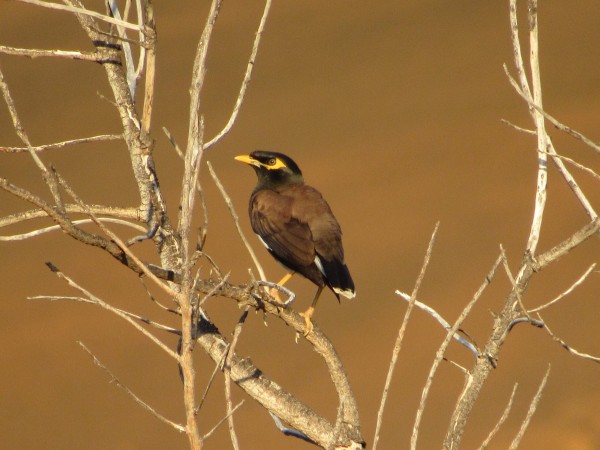 The common myna bird is a familiar sight in Ascension where it is numerous around island settlements, the mountain and other areas with access to fresh water.

It is identified by its brown body, black hooded head and with a distinctive yellow bill which leads into a yellow patch around the eye. They have a white patch on the outer primary feathers and the wing lining on the underside is white. Males and females look similar and are often seen together.

Myna birds can live for between four and 12 years and can reach speeds of up to 30km/hour when in flight. They are monogamous and are believed to pair for life. Myna birds breed throughout the year, becoming highly territorial, and neighbouring pairs often fight furiously. The normal clutch size is between four and six eggs laid in a nest of twigs, roots or even pieces of rubbish. Females incubate the eggs for 17-18 days and the chicks fledge at 22-24 days. The chicks are then supported by the adults for a further three weeks before becoming fully independent.

The common myna bird is native to Asia with a home range from Iran across to China and down to Thailand. Myna birds roost communally through the year, sometimes with other bird species, in roosts which can number into to the thousands. They may travel up to 10km between their roosting and feeding sites each day. They prefer to feed on the ground, grazing on insects, seeds, grain and fruit. They also feed on discarded food waste.

Whilst native to Asia, this species has been introduced to Australia, New Zealand, Madagascar, South Africa and a number of small islands such as St Helena and Ascension. Myna birds were introduced to Ascension to control the ticks and other parasites associated with cattle when the farm was operating on Green Mountain. Myna birds have since been declared as one of the world’s most invasive species, having a significant impact on biodiversity, agriculture and human interests. They pose a serious threat to native birds, feeding on Ascension’s sooty tern eggs, as well as predating native invertebrates and damaging crops.

Myna birds are very clever, and are able to adapt to a range of habitats. They communicate using croaks, squawks, chirps, clicks, whistles and growls. They also fluff their feathers and bob their head when singing. Myna birds were a popular cage bird in the 1980’s due to its ability to sing, speak and mimic new sounds. Their popularity was short lived however as the birds were found difficult to train.