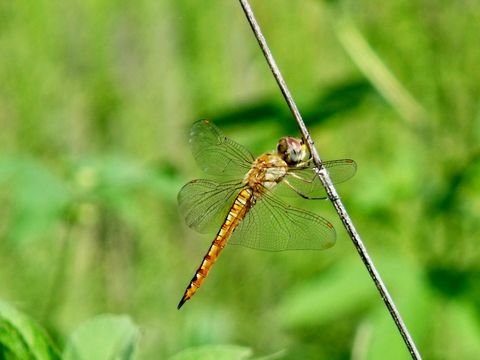 Dragonflies were in existence almost 300 million years ago, and once grew to have wingspans of 61cm. Modern dragonflies have a wingspan of five to 12cm, and there are currently around 5,000 known species on earth.

Also known as the globe wanderer and wandering glider, the globe skimmer is the most widespread dragonfly on the planet. This wide ranging dragonfly has populations on every continent except Antarctica, even being found in St Helena and thought to be the migratory species found here in Ascension Island.

This small dragonfly (up to 5cm in length) can migrate 4,400 miles without landing, completing one of the farthest known migrations of all insect species! To carry out this epic migration these dragonflies have a special adaptation. An increased surface area of their wings allows them to glide with the wind for long periods of time, using minimal amounts of energy. They are believed to migrate with rain fronts taking advantage of the higher winds and temporary shallow pools to breed in.

The globe skimmer’s head is usually yellowish red with the thorax (main body) varying from yellow to brown or olive. The colour of the globe skimmer changes with the population’s location. On Easter Island in the Pacific, many of them are known to be darker with black bases to the otherwise clear wings.

Female dragonflies will mate many times with different males throughout the breeding period.  When mating, dragonflies fly in tandem, with the female ovipositing (laying eggs) while the male remains connected. The eggs are spheroid in shape and a clutch of 500 to 2000 is laid. To reproduce dragonflies need a body of fresh water for their larvae (nymph) to develop in. The life cycle of the globe skimmer from an egg to an emerging adult can be completed in two months. This is much shorter than other species which can take a period of up to five years to complete.

It is unknown if the dragonfly breeds in Ascension but they are a welcome visitor feeding on mosquitos as adults and mosquito larvae as nymphs.