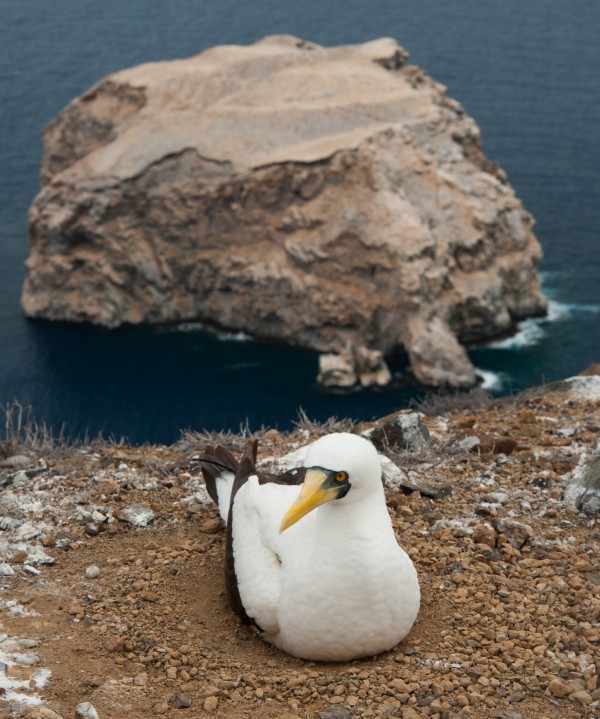 Masked boobies are found in the tropics across the world. In Ascension, masked boobies nest on Boatswainbird Island, offshore stacks, Letterbox Nature Reserve (NR) and the surrounding area. Their distribution is expanding each year and now small pioneer colonies can be found at the top of White Horse Hill and down to Crater Cliff.

Masked boobies first nested on the Letterbox Nature Reserve in 2004 after the feral cats were removed from the area. In the 2021-2022 nesting season, there was 2497 nesting attempts on the Letterbox peninsula. Unfortunately the poor weather and heavy rains has resulted in a poor productivity (i.e. the number of chicks which fledge per nest) for this species.

Masked boobies are territorial, performing aggressive displays to defend their nest. Each pair engages in courtship and greeting displays to reinforce their bond. The male generates a quiet whistle while the females grunt a loud honk.

Masked boobies lay 1-2 chalky white eggs in a shallow depression on the ground. These nests are often characterised by a circle of guano left by the birds during their incubation. Both parents take it in turns to incubate the egg for 39-48 days. The second chick typically does not survive and is often killed by the stronger sibling. The chicks require plenty of care and food, fledging after 120 days.

Masked boobies feed primarily during daylight hours. They use their excellent eyesight to spot fish and squid swimming around the sea surface. They then dive head first into the water, sometimes from as high as 30m, swallowing their prey underwater. To cushion the shock of hitting the water at speed, masked boobies have air pockets surrounding their eyes and brain to protect them from the impact. Like many of Ascension’s seabirds, the masked booby benefits from the presence of large predatory fish such as tuna which drive prey to the surface and facilitate predation by boobies.

Masked boobies remain fairly faithful to the island in terms of their flight range, however ringing recoveries have been seen from chicks ringed in St Helena. GPS tracking of juvenile masked boobies in 2021 showed they remained within several hundred miles of the island, highlighting the importance of the Marine Protected Area (MPA) for this species.