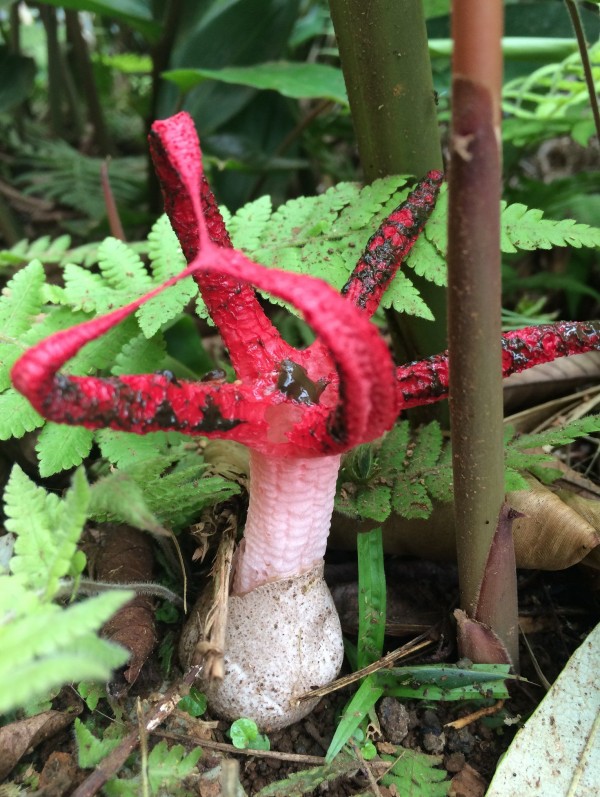 Nature notes is a monthly instalment bringing you information and updates about the natural world on Ascension Island. In this month’s notes – Octopus Stinkhorn!

Octopus stinkhorn fungi grow all over the world, especially in the tropics. However, stinkhorn is only native to Australia and New Zealand: it probably spread globally on ships leaving Australasia in the years after WWI. On Ascension, the fungus grows best on Elliot’s Pass and the track towards Dew Pond. It also fruits occasionally in gardens at Two Boats after prolonged heavy rain.

As with all fungi, the part we see is just the reproductive organ or fruiting body. The majority of the fungus is a network of filaments underground and running through dead wood. These filaments feed on dead plants and animals, helping break them down to form soil.

When they are ready to reproduce, stinkorns grow one or more pale, egg-like structures above ground – visible at the base of the stalk in the photo above. Four to eight red arms, each up to 10 centimetres long, then grow out of the egg on a short white stalk. The arms are covered in a foul-smelling brownish slime. The slime contains spores; it smells like dung or rotting flesh to trick flies and other insects into landing on the spores. These insects then transport the spores to the next place they land, allowing the fungus to spread. Despite the disgusting smell, octopus stinkhorn is not known to be poisonous to humans or pets.