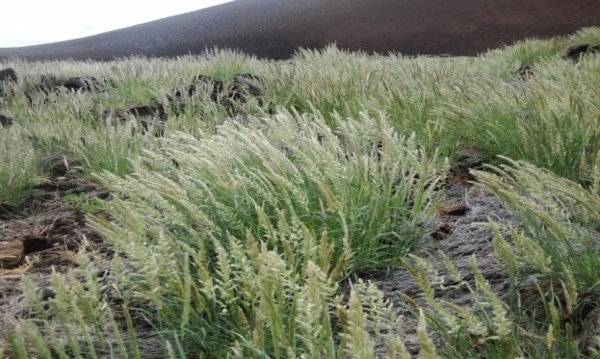 Ascension Island has recently been transformed by carpets of rain grass creating meadows across the island. Rain Grass remains dormant for many years, waiting for the perfect conditions in which to germinate. Germination occurs after heavy or prolonged periods of rainfall in areas which are normally dry and arid.

It is a dense grass, growing up to 50cm high and is finely hairy throughout. Each individual flower has a short hair-like projection (the awn) which spread to give a fluffy appearance. It is found across barren ground, especially in weathered lava. In some of the driest areas on island, it may form almost the only vegetation. It mainly grows in areas which are less than 200m above sea level. Flowering occurs within a few weeks and seed is produced in huge quantities. The florets are blown into drifts during dispersal. As the grass dies, it detaches from the ground and may form tumbleweed, shedding remaining attached seed as they migrate. The grain is well adapted for long periods of drought and is resistant to fire.

This species of grass is native throughout the eastern and southern Africa, around the Arabian Peninsula to India as well as Madagascar. Rain grass was first documented on the island in 1917 by the Eastern Telegraph Company. The director noted a sudden appearance of grass near the Wideawake Fairs. The grass was sufficiently thick that a crop of hay was harvested and was said to be of high quality. Small, sporadic bursts of rain grass reoccurred throughout the 1920’s and 1930’s, accompanied by swathes of grasshoppers and locusts.

It was originally believed that the seed of rain grass was brought to the island by sooty terns (Onychoprion fuscatus) as the first records of the grass were found around their colonies. This is a problematic idea however as the terns are entirely oceanic outside of the breeding season and do not frequent the African mainland except during heavy storms. Any attached seed would very likely be washed away long before the terns returned to Ascension. It is more likely that a human introduction took place. Prior to the note from the Eastern Telegraph Company, the Wideawake Fairs was the site of the Gill’s astronomical observatory, a war look-out post, and had been visited by many egg collectors and telegraph planners. These expeditions would provide ample opportunity for stray seed to take hold. Regardless of how the seed was imported, the success of the grass is remarkable.