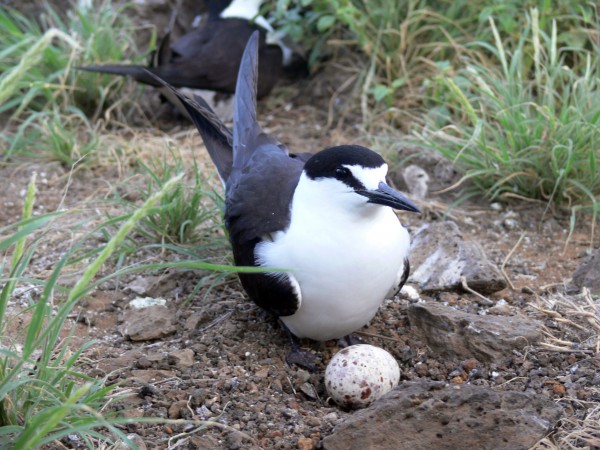 Nature notes is a monthly instalment bringing you information and updates about the natural world on Ascension Island. In this month’s notes – Sooty Tern!

The most numerous nesting seabird of Ascension Island is the sooty tern. The Wideawake Fairs in the south-west of the island are home to an estimated population of 250,000 nesting pairs.

Wideawakes are a large tern species at 33-36cm (13-14 inches) long with an 82-94cm (32-37 inches) wingspan. The wings and deeply forked tail are long and it has dark blackish-brown upperparts with white underparts. The legs and bill are black. The average life span of a sooty tern is 32 years.

Sooty terns are found widespread across tropical oceans. They are most frequently seen far out at sea, wandering widely but often following warm-water currents. They sleep on the wing (in the air) while at sea, taking short naps lasting only 2-3 seconds.

Sooty terns are sexually mature at around six years of age, coming ashore to lay a single egg on the open lava flows at Mars Bay and Waters Edge. They do not construct a nest, instead creating a nest scrape or laying in a shallow depression in the ground. Both adults take it in turns to incubate the egg for 28-30 days, standing to shade the egg from the hot Ascension sun.

Juvenile sooty terns are scaly grey above and below. They wander freely from the nest, returning to be fed regurgitated flying fish and squid from the parent birds. The chicks are capable of flight at 8-9 weeks however spend another few weeks around the colonies following fledging.

Sooty terns rely on large predatory fish to congregate and drive schools of small fish to the surface of the water. Recent studies suggested that the diet of sooty terns on Ascension over the last 100 years has shifted. There is now a higher percentage of small squid in the diet which are less nutritional than flying fish. The exact cause of this is yet to be uncovered…