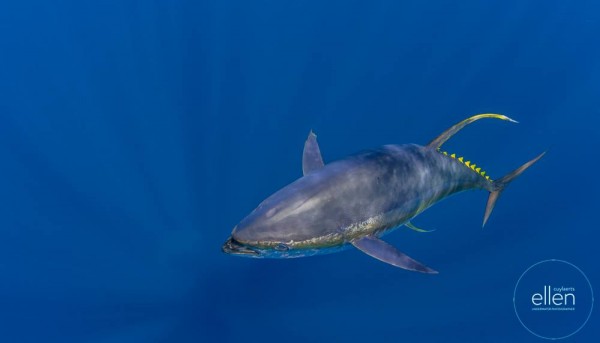 Nature notes is a monthly instalment bringing you information and updates about the natural world on Ascension Island. In this month’s notes – yellowfin tuna!

There are 15 species of tuna and many subspecies in the family Scombridae, which includes mackerels, bonitos and tunas. Of those 15 species, seven are considered to be commercially important. Yellowfin tuna (YFT) is one of those important species, and it is available on supermarket shelves in virtually every region of the world.

Yellowfin tuna (Thunnus albacares) are found in pelagic waters of tropical and subtropical oceans worldwide. It is one of the most common tuna species within Ascension’s Marine Protected Area (MPA), and one of the main pelagic species caught by fishermen around the island. YFT are among the largest tuna species, reaching weights of over 400 lb. The only larger species are Atlantic, Pacific, southern bluefin and bigeye tuna.

YFT begin their life as almost microscopic zooplankton. At this stage, they suffer very high levels of predation by fish, jellyfish, larger zooplankton and seabirds. To combat this, YFTs reach sexual maturity at the age of two (when they are around 1m in length) and reproduce via broadcast spawning. This is when males and females release millions of eggs and sperm in the water column at the same time. This method increases the likelihood that the eggs will be fertilised while decreasing the chances of predation. During the spawning season, females spawn about once every three days. They produce an average of one million to four million eggs each time they spawn.

At a young age, YFTs eat zooplankton, and their prey increases in size as they grow. As adults, they eat squid and large bony fishes, including blackfish. YFT around Ascension reach exceptional sizes and ages. Large males up to 13 years old are caught close to the island and appear to be attracted to the island’s abundant blackfish, which make up the majority of their prey.

Adult YFT are not eaten by anything other than the largest, fastest billfishes (such as marlin and swordfish), toothed whales, and some open-ocean shark species. YFTs are built for speed. Only those species that can compete with YFTs top speed of 50mph, or outsmart them, can prey upon them.

Tunas are unique among teleosts (bony fish) because of their ability to elevate the temperature of their ‘aerobic locomotor muscle’ to above ambient water temperature. Essentially, this means that YFTs have an advantage over other fish in cold waters. They can turn, swim and hunt faster to successfully catch more prey. This ability, combined with high gill-surface area, large hearts and high metabolic rates, mean YFT are highly efficient at oxygen intake and maintain bursts of speed for longer periods. They are similar to requiem sharks in that they need to constantly swim for water to be able to pass over their gills for oxygen. Like sharks, YFTs are also at the top of the food chain.

Based on previous tracking studies, the populations of YFT found within Ascension’s MPA may be semi-resident around the island and the two shallow-water seamounts to the southeast. However, they do not appear to breed around Ascension and it is thought that they migrate to spawning grounds off of the African coast to do so. Little is understood about the migration patterns of YFT, but migrations will likely coincide with food availability and spawning season. It is thought that YFTs have an organ just behind their brain that is sensitive to magnetic fields; it is this organ that may help them navigate to the same locations each year.