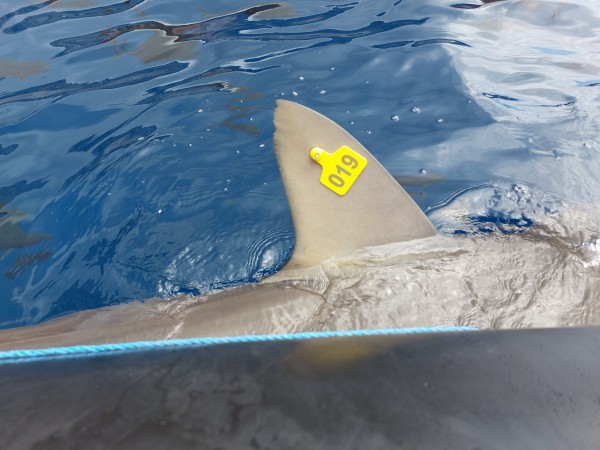 AIG is conscious of the difficulties and issues caused by the presence of sharks close to the island, and the work of the Conservation and Fisheries Directorate has been severely disrupted by their presence too. If their behaviour and movement patterns can be more fully understood, it might be possible to better predict where they go and when. To help identify and track shark movements, the Conservation and Fisheries Directorate have begun a shark tagging programme and are employing a variety of tagging methods including visual, satellite and acoustic tags.

In the first stage of the tagging project the Conservation Marine Team are securing brightly coloured visual tags to the dorsal fins of sharks larger than 1m in fork length (the tip of its nose to the deepest part of the notch in its tail). Each of these tags displays a unique identification number.

The distinctive coloured tags represent six different zones around the island. AIG recognises that it will not be possible to record shark movements without the help of people living on the island. The public know the waters better than anyone, so AIG is asking that fishers, boaters, and visitors to the pier keep an eye out for tags on sharks. If you see a tag on a shark, please make a note of the tag colour and the number, along with where you saw it and at what time.

Once you’ve recorded this information, please get in touch with the Conservation and Fisheries Directorate by telephone on 66403 or by email through mpa@ascension.gov.ac.

With everyone’s help in recording when and where the tags are spotted, it will be possible to estimate the movements of sharks that remain close to the coast.

The next stage of the project will involve deploying 22 satellite tags that will send location and depth data to satellites when a tagged sharks surfaces. Deploying these will hopefully add to our knowledge of where sharks go when they are not visible inshore.

Finally, with the help of a UK government Darwin Plus funded project and visiting shark experts, next year acoustic tags will be implanted into a number of sharks. These tags will relay data to an array of acoustic receivers around the island, providing even more information on where the sharks are moving.

Whilst we want to know where sharks are going, we do not want to do anything that could encourage additional sharks to come inshore. We also want to avoid attracting multiple sharks and getting them excited, as it would add unnecessary risk to those involved with tagging. Therefore, the shark tagging protocol involves only a small amount of bait on a hook. The bait is from a local species and is primarily tuna and grouper carcasses. There is absolutely no chumming involved during the tagging process.

The protocol involves catching sharks one at a time and pulling them alongside the boat so a tag can be secured to the dorsal fin. To catch the shark, a small chunk of bait is attached to a circle hook on the end of a 100m rope with two or three buoys along its length. The shark tires itself out by tugging on the buoys so that it is easier to pull the shark alongside the boat.

With a taut leader at the front and a tail rope at the back, the shark is held in position long enough to measure its length and record its gender, before the tag is attached to the dorsal fin. This method has been developed in consultation with shark experts and was previously used when tagging sharks at Ascension’s seamounts.

Tagging efforts so far have seen tags deployed at several locations around the island. Of these, 19 yellow tagged sharks have been in the Boatswain Bird zone, 10 green tagged sharks in the Georgetown zone and three white tags in the Airhead zone. Several small sharks have been caught and measured but were too small for tagging.

In total, 28 female sharks have been caught ranging in size between 85cm to 270cm (fork length) and 13 male sharks have been caught with a size range of 80cm to 190cm (fork length). Only those greater than 1m in length were tagged. AIG will continue to update the community through notices and social media as more sharks are tagged and we learn more about their movements around the island.

How you can help

While you are on or near the water please look out for the tags. If you spot one record the date, location, tag number and colour and then let us know. There will also be a data sheet in the shade hut at the pier for recording your observations. In the meantime please come into the Conservation Office or contact us through phone on 66403 or by email through mpa@ascension.gov.ac.

We appreciate that everyone wants to know more about why shark numbers appear to fluctuate as they do and what the sharks are doing around the island, and with everyone’s participation in this project we will be better able to track and understand this. 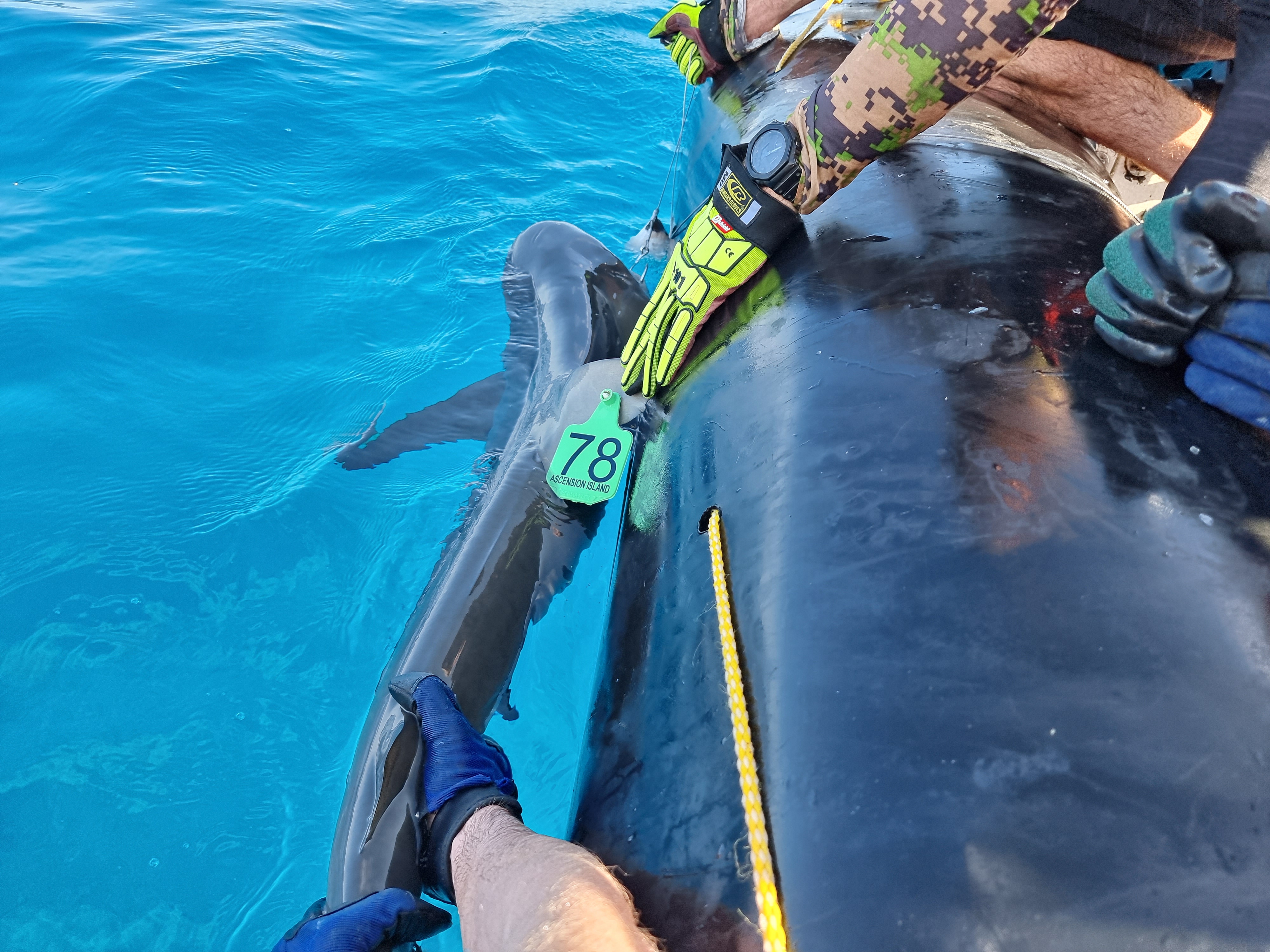 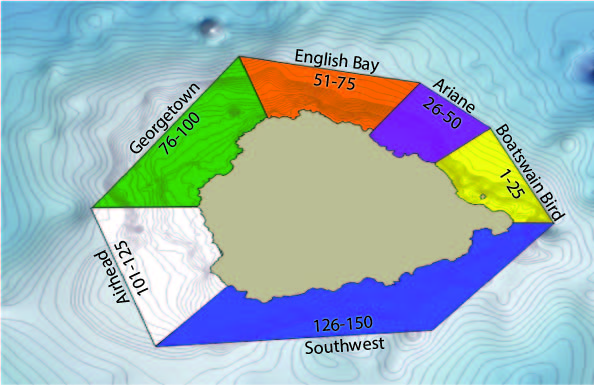 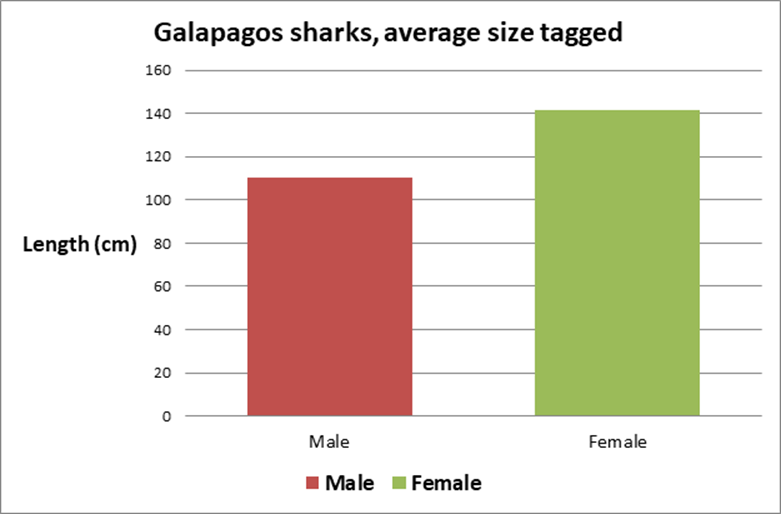