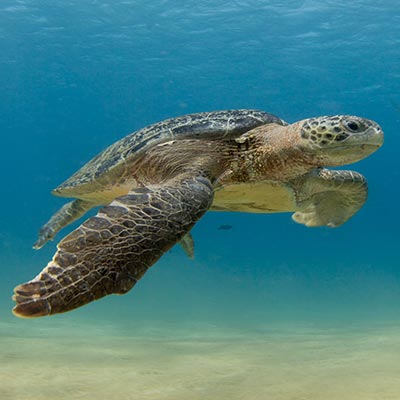 Today, 23 May 2022, is World Turtle Day. This is an annual observance to help celebrate and protect turtles around the world. There is a lot to celebrate for this day here in Ascension as the island hosts the second largest nesting population of green turtles in the Atlantic, which has a breeding season from November through to July.

Ascension’s waters are also visited frequently by hawksbill turtles, as well as by leatherbacks and loggerheads in smaller numbers. That means a total of four out of the world’s seven species of sea turtle can be found within the Ascension Island Marine Protected Area.

What do we do for turtles here in Ascension?

AIGs Conservation and Fisheries Directorate conducts annual monitoring and strand checks for the nesting female green turtles. By raking over turtle activity on nesting beaches to cover old tracks, it is possible to count the number of turtles that are coming ashore each night as well as how many of those turtles successfully nest. This allows us to keep an eye on the size of the population and monitor its recovery from the depletion it faced from harvesting activities that used to occur on island and elsewhere around the Atlantic.

This year has also seen a shade trial experiment being conducted on the island. Members of the public may have seen new structures built on Long Beach and North East Bay which are being used as hatcheries. Staff have relocated some turtle nests into the hatchery, deploying temperature recorders in each nest to see the effect that using a shaded area will have on the turtle eggs.

This is being done because turtle sex is determined by the temperature the eggs experience during incubation. Warmer temperatures produce female turtles and cooler temperatures will produce male turtles. In future the information collected from this experiment will help us to see if creating artificial shade can help address the impacts of climate change on turtles.

If global temperatures continue to rise, there is a risk that the turtles nesting at Ascension’s beaches will in time produce mostly, or only, female offspring. If so this would have a devastating long-term effect on the Atlantic green turtle population, so it is important to trial ways to help combat this.