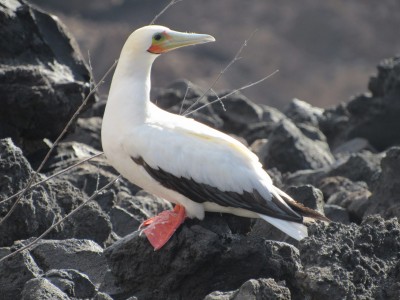 The red-footed booby is a large bird in the booby family, Sulidae, with characteristic red feet which develop as they reach sexual maturity. Interestingly this bird can come in a number of different colour morphs. On Ascension we have two - the white colour morph pictured above, which has black flight feathers, and a brown morph. Both morphs have white tails, red feet, pale blue bills and blue and red pigmentation around the face. Juveniles are brown with pink feet and dull beaks. Like all boobies, they have evolved to dive into the water at high speed in pursuit of their prey of fish and squid.

Ascension Island seems to have a small but self-sustaining population of red-footed boobies. Due to their low numbers, they are not a common sight around the island. Elsewhere in the world, red-footed boobies will make nests trees, but on Ascension Island they solely breed on the cliff faces of Boatswainbird Island. They can sometimes be seen gathering nesting material from the sparse vegetation that grows around letterbox peninsula after periods of rain. However, they have not been recorded in modern times breeding on the mainland. It is assumed that the introduction of cats in the 1800s to the island limited successful breeding to Boatswainbird Island, and they have not recolonised the mainland since the feral cat eradication in 2004. Though these birds are currently classed as "Least Concern" by the IUCN, populations are in decline around the world. 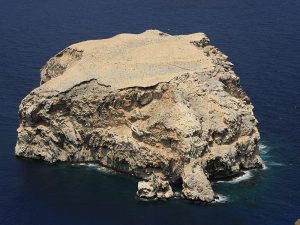 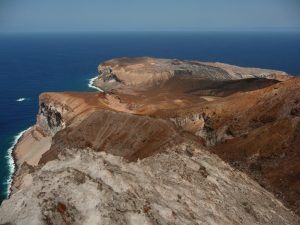