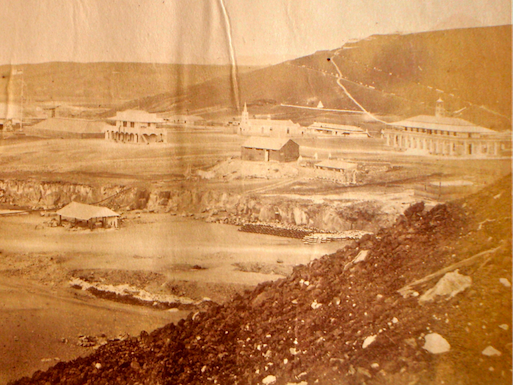 Soon after taking up appointment as garrison Commandment Captain William Bate began a program of works designed to improve the state of the island. One such project was the construction of a suitable barracks for the men under his command, to be located in Georgetown.

Although construction began in 1833 the barracks would not be completed and habitable until 1836. Originally a single-storied building a second story and clock tower were added sometime after 1848.

The barracks continued to house men deployed to Ascension until 1903 at which point they became used as a stores with the cellars serving as a magazine.

In the latter half of the 20th century the building was occupied by the Exiles Club, a members club which continued to use the building until the turn of the millennium.

Today the building has been badly affected by white ant and as such the upper floor is no longer accessible to the public. The ground floor of the premises is host to a number of shops.